As Turkish Stone World Magazine, we contacted the Ministry of Commerce with the aim of giving information about the “Turkish Natural Stone” to the sector and target markets of the sector. We share with you the current information about the stones produced as blocks such as marble, travertine, granite, andesite, basalt, as well as the natural stone, which are used for decorative purposes as described in the b clause of the Article 2 (b) of Mining Law No. 3213

According to the information obtained from the Ministry of Commerce, the number of group (b) licence applications was 1391 in 2017 and 714 in 2018. As stated by the Ministry, 92 (b) group-operating licenses and 78 (b) group-operating permits were issued in 2017. (Note: This data represents the number of sites for which the operating license and operation permit were issued for the first time).

There are also licenses that were revoked. According to statistical information, 292 group (b) licenses (including research and operation) were revoked in 292 provinces (b) were canceled in 2017.

One of the most important problems of the sector is the duration of license purchase times. The Ministry of Commerce gave the following information about the quarries awaiting approval: For the license request applications made to our General Directorate, those who are missing of technical competency within the scope of the second paragraph of Article 24 of the Mining Law 3213, and are missing of receipt of discharge within the article 22 / A of the Law no. 6183 along with the ones who are missing of operating license fees are not able to get operating licenses until they complete their shortages. On the other side, according to the 11th  paragraph of Article 24 of the Mining Law 3213, in order for an applicant to get an operation permit together with / or after the receiving of operation license; documents such as the environmental impact assessment decisions, ownership permits, business opening and working licenses and the permits related to the areas processed in the records of our General Directorate, should be submitted to the General Directorate.

According to data presented by The General Directorate of Mineral Research and Exploration, the potential natural stone reserve of Turkey is 5.161 billion cubic meters. There are 2,241 quarries, which own business permits in Turkey. Burdur is the leading city in Turkey in the number of quarries with II (b) group operation permits. The other cities and the number of II (b) permits by cities are as follows: 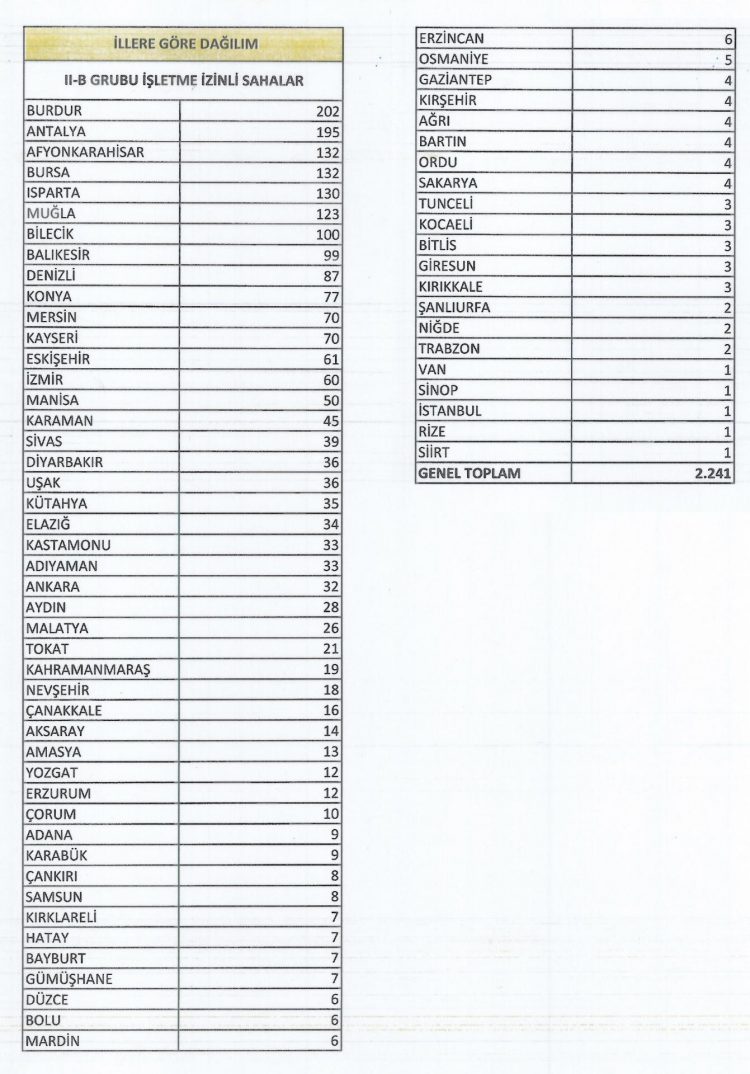 11- FIELDS WITH B GROUP OPERATION PERMITS

(According to the data of Istanbul Mineral Exporters Association (İMİB) there are about 1200 beige marble quarries in Turkey.)

The Ministry explains the latest situation of natural stone production and export in Turkey, 5.161.000.000 m3 natural stone reserve and 2,241 quarries with operation permits as follows:

* Based on the 2016 data presented by the Chamber of İstanbul Marble and Granite Processors Turkey is the sixth leading natural stone producer country in the world following in China, India, Italy, Spain, and Iran.

* Based on the 2018 “Natural Stones Industry Report” presented by the Ministry of Commerce, Turkey is ranked the third country in world natural stone exports after China and Italy.

Jakarta Did Not Satisfy

Nihat Dilmen; the Owner of Dilmer Machinery We are sensitive to “zero defect “

Yeşilova Marble: The meeting point of beauty and nature

Night of Pride for Mineral Exporters’ in İzmir and Manisa