Claims that radiation exists in Turkish marble is nothing but a huge lie!

Natural stone exporters denied the allegations that Turkish marbles were not preferred in the construction of the 3rd Airport made in Istanbul because of the radiation, with scientific reports.

Mevlüt Kaya, Chairman of the Aegean Mining Exporters’ Association, responded to the current allegations that radiation exists in the natural stone with scientists.

“The claim that there is radiation in Turkish marble is a huge lie. Those who assert this false claim should know that they are harming Turkish natural stone sector, stones of which are the healthiest and hygienic place and wall covering material in the world. Our stones are clean.”

“The travertine, beige marbles, white marbles and other colored carbonated marbles, which make up 95% of Turkey’s marble production, do not have any radiation and environmental emissions, and in many respects they have positively beneficial effects on human health.”

” Now, a so-called clever person made a claim. This claim became so popular in social media that people started to dismantle radiation-free natural stones in their homes. Since Turkey remarkably ranks at the third place in natural stone export in the world, produces its own devices and is no longer dependent on other countries, some actors try to hinder these developments.”

“A massive betrayal to our sector”

Mevlüt Kaya, the Chairman of Aegean Mining Exporters’ Association, expressed the regret that they felt about the “radiation” statements that were made about the Turkish marbles used in many countries of the world. He expressed his sadness by saying that: “It is very sad that Brazilian granite is used in the construction of Istanbul’s third airport which is the show case of Turkey, whereas Turkish natural stones were used in the Kaaba, the White House and Vatican. The lie that there is radiation in Turkish natural stones as a justification of imported granite use is nothing but a huge betrayal. He also stated that: “Istanbul’s third airport is still being constructed and it will become the largest airport in the world with its 200 million passenger capacity. Thus, it is going to represent Turkey when it is completed. However, it is very sad and disappointing to hear that imported Brazilian granite is going to be used in the construction of the airport. Another disappointing development for our sector is the claims that Turkish natural stones are radioactive as a justification by those who import this granite. Those who asserted this false claim should know that they give a huge harm to the Turkish natural stone sector. Our stones are clean. Turkey, exporting to 170 counties in world with a 2 billion dollars in value, has a potential well above this figure. Turkish natural stone sector is in competition with countries such as Italy, China, Spain and Iran. Whereas Turkish natural stones were preferred in the most prestigious projects in the world, unfortunately this abundance of ours is not preferred in our country.” 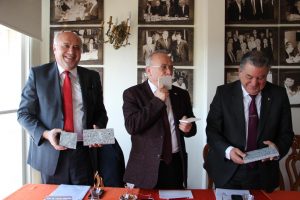 Prof. Dr. Turgay Onargan, Dokuz Eylül University Faculty Member of Mining Engineering and Head of the Department of Natural Stones stated that: “The marbles Turkey produces are demanded by the whole world and they are composed of single mineral calcite minerals. Turkish marbles also include rock-forming calcite minerals and color-imparting oxides. There are no radionuclides that could be a source of radiation in these marbles, and to mention any radiation in these stones is completely impossible. Therefore, the travertine, beige marble, white and other colored carbonated marbles, which make up 95% of Turkey’s marble production, do not have any emission in terms of radiation and environment; and in many respects they have positive effects on human health. Onargan, stating that radioactivity can be seen in some natural stones, said that: “However, some granites are known to contain radioactivity due to radionuclides present in their mineralogical compositions. Granite type natural stones are classified as stones that contain a lot of minerals and their mineral contents are the minerals such as quartz, feldspar (orthoclase) and biotite (black mica). Radon equivalence can be determined according to the percentage of 40K radionuclide present in radiation tests performed with Gamma spectrometry in the commercial granite samples with high potassium and zircon content. When we look at the results of analysis of natural stones produced in a small number of granite enterprises in our country, it is seen with test reports that they are well below the limit values.”

Asst. Prof. Dr. Nejat Kun, Faculty Member of the Department of Geological Engineering in Dokuz Eylül University told that natural stones are divided into three groups as sedimentary, magmatic and metamorphic stones, that sedimentary and metamorphic stones constitute 95 % of natural stones in Turkey, that it is scientifically proven that these stones are radiation-free, that the radiation rates in magmatic natural stones do not harm human health, and that these statements were proven with the tests they made. Kun said that: “We have been working on marbles for 35 years. People have been making these kind of claims since Turkey increased its export rates to China, the USA, and other countries. Since Turkey remarkably ranks at the third place in natural stone export in the world, and produces its own devices, and is no longer dependent on other countries, some actors try to hinder these developments.”

The Star of Marble: STAR MARBLE

Hakan Karaaslan, the owner of Focus Mining: ”Service is not Limited to Sales“

Zimek makes the difference with the Prime 2200