AYYILDIZ MARBLE; The Rising star of the sector

Ayyıldız Marble, with its sectoral experience over 30 years, attaches importance to Re & De  activities in order to acquire maximum efficiency out of raw materials. The company, along with the quarry investments, plans to increase factory investments as well. Ayyıldız Marble is assertive in the sector with its wide product scale. Ayyıldız Marble Marketing administrator, Tolgahan Ayyıldız says: “We are a company that prioritizes quality, trust and customer satisfaction. We have modernized ourselves in the last two years and will continue in the future as well. Ayyıldız Marble have proved its power and quality through the projects it took part.” 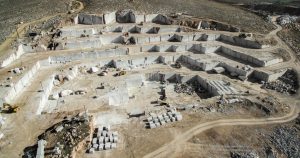 Tolgahan Ayyıldız said: “We produce Rising Star, Shining Cloud and Moon Shine stones in our quarries which have 250 hectare field and more than 10 million m3 reserves. We mainly export blocks to China but produce processed materials in our new factory as well. Our factory is located on a 45.000 m2 outdoors and 15.000 m2 indoors field in Marble Organized Industry Zone in İscehisar district of Afyonkarahisar.”

Ayyıldız said: “The Rising Star stone of our Şuhut Grey quarry has became very popular in the market. The annual production volume of Rising Star in 25.000 tons. The product is exported in the form of blocks, slabs and processed material. Our grey colored stone is a favorite project stone, which is demanded by architects due to its shiny surface and its blending color. Rising Star is suitable for use in interior and outdoor floors, walls, counters, elevators, stairs, molding and riser.”

Create a wave form on the surface of stones!