BBC Mining: “A company far above the ordinary”

BBC Mining, which was found in 2016 with 20 years of sectoral experience, maintains its claim in the Far East Market, thanks to its showrooms and slab depots in Xiamen and Shuitou,. The company also has a liaison office in Shanghai.

BBC Mining supplies and sells 10 different stones from seven quarries in Turkey. The company aims to provide new and unknown stones that had never been exported before, from brand new marble quarries in Turkey, to projects, via its marketing team in China. The Company owner Şaban Şakar, stating that they have transferred their 20 years of sectoral experience to BBC Mining and Consultancy Co. Ltd., which they founded in 2016. Şakar said: “Our Konya based BBC Mining and Consultancy Co. Ltd. was established on the basis of experiences we have gained in different companies of natural stone and mining sector. Thanks to the communication office we have opened in Shanghai, we are able to solve problems instantly. We have been carrying out market research via our showroom and slab depot in Xiamen (China) and Shuitou (China) throughout 12 months. Besides serving to natural stone sector as an intermediary company, we aim to find markets for the unknown, brand new stones of our country and promote new Stones in the Chinese market.”

Our Favorite Product is ‘Mocha’

Şaban Şakar said: “Our favorite stone is Mocha. We supply five different varieties of Mocha, which are Gold Mocha, Sand Mocha, Gray Mocha and Yellow Mocha. We also export different selections of Limestone blocks from Finike region of Antalya. As a company aiming to open to the world from Konya, we also give great importance to the export of travertine produced in various regions of our country and we export travertine to different regions of China. Gray Beige, Dark Beige, Emprador and Burdur Bej are among the stones we supply from different regions of our country. As we mentioned at the beginning, thanks to our experienced staff and our marketing team in China; our favorite products are the ones that are produced in the newly opened marble quarries in our country.” 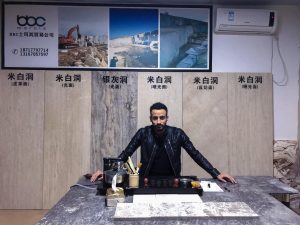 BBC Mining is Active in the Chinese Market

BBC Mining is mainly exporting stones to all parts of China. The company attaches importance to the introduction of the products obtained from the newly opened marble quarries and to provide these stones to the projects in the regions, where they are predominant. BBC Mining processes the blocks they supply from Turkish quarries into slabs in Shuitou. These slabs are distributed from the showrooms and depots in Shuitou to world market. The company has contacts in countries such as Taiwan, Indonesia and Malaysia. Through its second company located in Shanghai, BBC Mining aims to process the Turkish blocks in China and sell cut to size materials to USA, Canada, Europe and the Far Eastern countries.

Şakar said: “We carry out after-sales follow-ups very carefully. Although we ship our products via F.O.B., we follow the blocks we sold after they are loaded onto the ship and arrived to the factory, where they will be processed. We are in frequent contact with our customers, and we are able to detect customer dissatisfactions at their place. Receiving customer demands and considering urgency, we are giving priority to speed and sensitivity in supplying our customers’ needs.

Şakar further said: “There are hundreds of big companies in China which haven’t come to Turkey and bought Turkish natural stones before. “We are aiming to bring these Chinese companies to Turkey and sell our natural stone products to their projects via our experienced marketing team, who graduated from Chinese universities and can speak a very good level of Chinese. With this kind of marketing technique, I believe that we will have important contributions to our country and marble sector.” 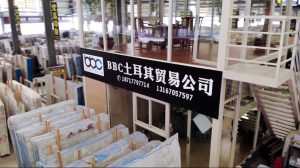 “We had Difficulty in Supplying Blocks“

“Although we had a fairly stable 2018, we have achieved to grow two fold compared to 2017. Since we received high demand for Turkish natural stone, we sometimes had difficulties in supplying the demands of our customers due to the shortage in marble quarries in Turkey. We have faced major problems with the producer companies. Some producers increased their prices in the middle of the season, although their stones had been promoted and chosen by the projects, due to their lack of sale strategies. The same producers quit selling their stones to our projects and sold them to other buyers instead. For these reasons, we had to change the stones of the two major projects. Such problems are the main problems of all exporters.”

Şakar said, “Recently, the most demanded stones are the light gray stones, as everyone knows. After this intense demand in the market, many gray marble quarries were opened. If not sold under control, gray marble can lose popularity as it happened to many of our natural stones. I do not think that 2019 will be different from 2018 as there is not much development in the positive direction. Marble producer companies should plan their productions carefully like the companies in other sectors.”

Night of Pride for Mineral Exporters’ in İzmir and Manisa

BBC Mining: “A company far above the ordinary”