MKS’s new age, five-axis Bridge Cutting machine KKM-625, an easy to use machine with ergonomic structure and solid form, was launched at İzmir MARBLE Fair as the new star of the Company.

KKM-625 machine, which was developed by the Re & De Department of Turkey’s leading international marble and natural stone processing machines producer company MKS, has attracted great attention of the visitors.

İsa Çallı, the manager of MKS design team, stated that the company has designed such a machine according to the choice of the sector, which prefers machines that increase production as well as quality in their new age marble and natural stone processing factories. Çallı continued by saying: “There has been a demand for such a machine in the sector for long time. MKS brand needed to produce a new age machine, which can increase production as well as the quality and make project based production along with its contributions to artistic processing. You can produce whatever you dream and cut alternative shapes for projects with KKM-625. Today, it is not difficult to produce artistic products out of natural stone. We are very proud that MKS, the pioneer of natural stone processing technology in Turkey, is closing such a gap.”

Just imagine and it gives art to Natural Stone. Can be used as Bridge Cutting Machine by installing a saw. Also can be changed in to a Vertical Processing centre by installing an other apparatus to the engine which has 6000 RPM. 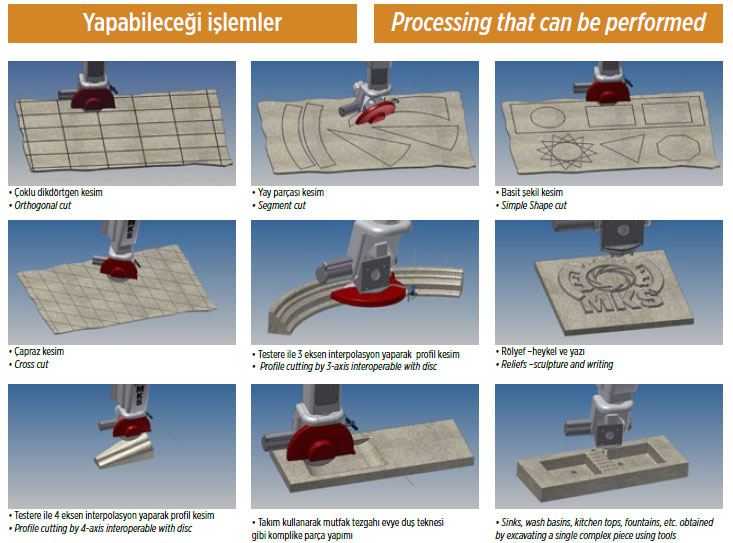 THE PRESENTATION OF PEDRINI SPA TO THE INTERNATIONAL STONE WORLD RECENTLY:

GMS Machinery is Assertive in Granite Polishing with GRANIT 2100XR

Nihat Dilmen; the Owner of Dilmer Machinery We are sensitive to “zero defect “